Here are some examples and notes of the lack of respect in Peru.

Here are pics of a sign I saw in a restaurant. 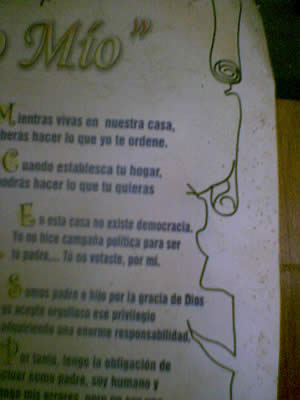 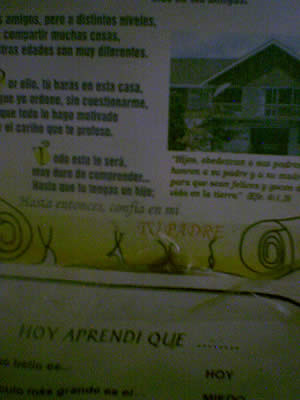 Here is some of what it says:

Last night I heard a couple in the hotel room next to me. It was impossible not to hear them. She was crying out in pain, or pleasure, or a little of both maybe, but mostly pain, I'd say. Like a good sociologist I went out to hall to listen more closely. It was obvious what they were doing. Or what he was doing to her, let's say. But she didn't seem to be enjoying it. At one point I clearly heard her say, "Asi no puedo." That means, "I can't do it like that." Then I heard her say about 6 times, "No. No! No!" And I heard him slapping her, though I don't know on what part of the body. Was she enjoying this? Did she feel respected? And if they conceived a child last night, would it be fair to say that it was through the "Grace of God"?

The other day a girl named Eli, who is almost 18, asked her mother if she could do something. The mother said no. Then Eli tried to talk to her again about it later. The mother said, "Daughter, I already told you no once. I don't want you to keep asking me." The daughter thinks she obeys her mother out of respect. But when she was 15 and went to a party once without asking her mother, the mother hit her. Since then the daughter has never disobeyed her mother. Is it fair to call this respect? Would it be fair to say there is mutual respect in this home? This mother, by the way is one of the more open minded, most "modern" and least violent mothers I have met or hear about in Peru.

Yesterday I talked to a 20 year old and asked her if her mother used to hit her. She said, "She still hits me."

One day I saw a man whistle and then hold up his glass, showing he wanted a refill.

The other night a waitress walked up to a customer and said, as if she were angry at him, "Qué vas a comer?" Which means, "What are you going to eat?"

I have never seen a country where people whistle so much to get someone's attention, instead of calling them by name or going over to talk to them.

I have never seen a country, with the possible exception of Ecuador, where so many people blast their music out of their homes, restaurants etc. at all hours of the day and night, without out any regard for their neighbors and with no respect for the concept of sleep.

Nor have I had so many people refuse to turn down their music when I have asked them. Although to be fair, most people have turned it down when asked. At night though, I don't bother to go ask.

I have never seen a country where they shoot off so many firecrackers at all times of the year. Each town has its own little celebration at different times of the year and it is a custom to shoot off firecrackers, which sound more like bombs, starting early in the moring and lasting till after midnight sometimes. To me this is a total lack of respect for everyone who wants to sleep or think in peace.

This morning for example, I was awoken at 7 am by the sound of a loud explosion. Then at 7:30 there were more explosions and again at 8. They are so loud it makes me literally jump and makes all the dogs start to bark. The dogs are smarter than the people. They know that noises like that are unnatural and they bark to complain. But the Peruvians just accept it as "costumbre". Custom and tradition. Just like the people in Indonesia. Actually I suppose most cultures have customs which make no sense to someone from the side, and which are perpetuated for no good reason at all.

It is seven after midnight. Someone just shot off about ten of the missiles (cohetes) which sound like bombs. They were very far away but the sound echoed through the mountains. They were spaced out about a minute apart. After the first one I thought it would just be one. Then two, then three. I counted up to nine or ten. It is hard to believe someone would shoot off something like that at midnight on a Monday night. I don´t know if it is the start of some festival again or what. But it is about the last straw. Jerren and I are both ready to leave this place called "Peru."

It is two in the afternoon. Someone just shot off another one.